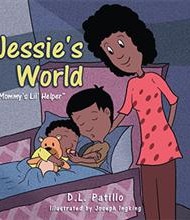 Jessie, a young boy who is no longer the center of attention once his baby sister appears on the scene, learns to adjust to his new role as a big brother in D.L. Patillo’s picture book Jessie’s World: “Mommy’s Lil’ Helper.”

“Mommy’s Lil’ Helper” is a sequel to Patillo’s first book, Jessie’s World: “The New Baby”, featuring the same characters. Now, with the new baby arrived and settling in, Jessie is disappointed that his mother seldom has time for him. Mom realizes that getting Jessie more involved in caring for his new sister will not only help her, but also make Jessie feel more included. She invites Jessie to assist her, and while he struggles to be useful at first, he finally manages to sing his sister to sleep.

A plethora of other children’s stories address the feelings of jealousy and resentment siblings might feel at a new baby in the house. But while Patillo’s story doesn’t break any new ground, her hero, Jessie, does stand out by being well-behaved and sympathetic throughout; there are no temper tantrums here, and readers will appreciate Jessie’s sweet disposition. The illustrations in “Mommy’s Lil’ Helper” are also appealing, with simple, clear depictions of the characters and their actions, as well as nicely textured backgrounds.

Patillo’s writing, however, is peppered with a variety of typographical, grammatical and punctuation mistakes. For example: “Suddenly! [sic] she had an idea.” And: “Jessie yawned with almost every word he song [sic].”) Such missteps are distracting and lend an unpolished feel to the reading experience.