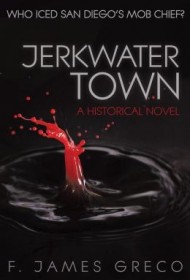 An emotionally damaged reporter tries to ferret out the truth about a mob hit in this richly researched thriller that wears its density like a badge of honor.

While the novel is a sequel to the author’s previous Falling Down: A Tale of Addiction, Betrayal & Murder, it’s possible to read this as a stand-alone, albeit one with much back story shoehorned into the front end.

The novel—mostly set in 1990 before cell phones and the Internet became useful tools of investigation— begins when criminal defense attorney Michelle Gallo is confronted by her sister Maria, a beautiful bad seed who was long thought to have disappeared. Maria reveals that the father of her son, Vittorio Erbi, has been in jail since 1980 for murdering mob boss Frank Bompensiero.

To help Erbi’s case, Maria enlists troubled investigative reporter Nick Lanouette, whose sexual addiction in Falling Down not only got a girl killed but nearly ruined his marriage. Nick reluctantly returns to San Diego, where he uses his skills to unearth a dizzyingly byzantine family history that winds from the turn of the century through the labor riots and mob wars of the 20th century, all the way to a conspiracy among made men against Bompensiero.

While compelling, the story offers an odd mix of periods and styles. The modern sections, though far more propulsive than the rest of the novel, have the texture of a 1970s or ‘80s airport thriller. (As such, they can feel a bit dated.) Meanwhile the flashbacks, set in 1909 and 1930 with a dip into the 1950s, are a mix of exhaustive —and sometimes exhausting — historical research wrapped in the tropes generally associated with Mafia novels. This sometimes makes for a jarring reading experience.

Overall, Jerkwater Town’s ignoble violence and explicit sex may appeal to fans of Mario Puzo’s similarly lurid bestseller The Godfather. Readers wanting something more streamlined and nuanced, however, could be left wanting.