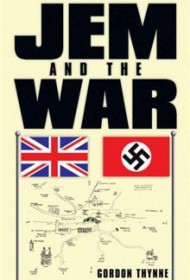 Jem and the War is a young adult novel that takes place in a small British town against the backdrop of the early part of World War II. Jem, a precocious preteen boy, has a number of adventures in his village of Althwaite, including mistakenly believing that the town hobo is the long-lost son of a local spinster; re-enacting a fairy tale that goes wrong and unexpectedly leads to a friendship with a titled aristocrat; and observing the interactions between the Althwaite-born children and newcomers evacuated to the countryside from urban areas during the war.

The novel’s greatest strength by far is the author’s gift for creating memorable, lovable characters. In terms of structure, however, the novel often feels like a series of episodes without an overarching plot providing rising tension and an eventual resolution. The book also breaks one of the cardinal rules of writing for youngsters: never make your protagonist younger than your targeted readers. (The book’s length suggests that it is aimed at a young adult audience.) Although this has been done successfully – think the Nancy Drew series – the author is taking a risk.

Also, at times Jem seems a bit like a mini-adult, with grownups too willing to confide in him. In one instance a young woman shares her reticence about joining the women’s division of the armed services because of the effect it could have on her new marriage.

Overall, though, Jem and the War is a charming, amusing read that serves as a glimpse into the closeness of small-town life and a look back at a more innocent time, when children had more freedom to have and create adventures of their own.