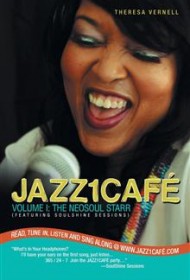 STARR, a rising singer extraordinaire in the modern-day Philadelphia music scene, struggles with love interests, a budding career and a family secret in this uniquely formatted romantic novel.

Rofiki is STARR’s Rastafarian boyfriend of 10 years who claims to be lining up a lucrative recording contract for her in New York City. Instead, he is secretly involved with another woman. Meanwhile, STARR catches the eye of Bluesy, a coffee shop owner with his own secret. As the story progresses, a series of flashbacks show how dramas within the characters’ early lives have influenced their current actions, putting some of their lives and futures at risk.

Author Theresa Vernell, a Tampa-based Internet DJ and professional broadcaster, has built the book around real-life songs and lyrics that range from jazz, hip-hop and gospel to neo soul. Every page sports bold song titles and occasional lyric snippets that connect to STARR’s feelings and situations.

Some of the writing is rhythmic in style or cleverly phrased. For example: “Breaking STARR’s heart and tearing it apart and making her cry telling her lies.” Also: Rofiki had “a hip-rhythmic D.J. cutting and scratching bounce to his walk.”

While the book is effectively written in the musicians’ cultural dialect, it is flawed by numerous misspellings, word usage errors, incomplete sentences and erratic punctuation. In addition, some background details within the dialogue (such as information on the Lafayette Afro Rock Band) appear to have been taken directly from online resources. And despite a 22-page music directory at book’s end, it’s unclear whether Vernell has received permission from those many artists to reprint their works.

Overall, while the novel may appeal to those interested in a peek at the inside life of independent music artists, it needs more attention to such details in order to appeal to a wide audience.