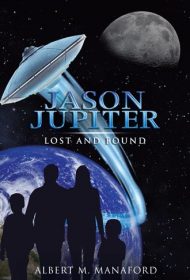 Set in the early 21st century and occurring over several days, the novel centers on Jason Jupiter, age 10, and his relationship with a young alien, Michael, whom he discovers in the wreckage of a cargo ship that crashed near Jason’s home in New Mexico. They quickly become friends, and Jason eventually introduces Michael to the rest of his family.

The plot turns when the family takes a trip to the moon in a spacecraft piloted by Michael and is intercepted by the alien race that created him. The aliens reveal that Michael is genetically engineered to become a more advanced version of their kind. The question becomes whether the aliens will allow Michael to be adopted and raised on Earth by this human family. The aliens view humanity as morally and technologically benighted, and are reluctant to entrust Michael to human care.

The author’s presentation of the aliens’ technology is appealing. There’s an undeniable “wow factor” in the characters’ ability to manipulate gravity, amplify a body’s immunology, travel at faster-than-light speed and explore the potential of wormholes. Having Jason’s scientist parents discuss the philosophical implications of these technologies emphasizes the limitations of humanity’s scientific understanding compared to these beings.

The plot, however, isn’t particularly compelling. Readers will quickly predict Michael’s fate, and otherwise the work merely details the Jupiter family’s days aboard the alien craft. The novel raises intriguing questions, such as how Michael might assimilate to living on Earth, but never answers them. While Manaford implies this book is part of planned series, exploring some of these elements in this installment would add much needed suspense.

Although the book isn’t labeled “young adult,” it seems targeted to that audience, and Manaford’s firm grasp of the science would interest any young futurist. With a more compelling plot, however, it would appeal to a much wider audience.