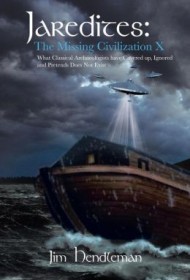 In Jaredites: The Missing Civilization X, author Jim Hendleman presents an alternative view of history. According to Hendleman, an advanced race known as the Jaredites lived on Earth 4,500 years ago. It was preceded by the Adamics and followed by the Nephites. All three civilizations were, Hendleman posits, more advanced than our present one.

The author speculates that the Jaredites had electricity, laser-cutting beams, anti-gravity sleds, and aircrafts. The author also believes that “Jaredite tools built at least some of the oldest pyramids.” Additionally, he states that “the ancient Jaredites developed and built the first road network throughout their area of South America,” and that they “maintained a type of space base, or permanent colony on Mars.” For proof concerning the Jaredites, the author quotes the Book of Mormon and also argues that there had to have been some basis for the depiction of ancient aircraft and nuclear wars in texts such as the Mahabharata.

While the author advances a compendium of arguments for his theories, he sometimes neglects to mention his sources, or refers the reader to questionable ones. For instance, at one point, he directs readers to “Google Cherokee Indians & DNA-based Israeli Jews-follow all links [sic].” The author also fails to argue a number of his premises in a convincing manner. For example, he discounts carbon dating and, by implication, stratigraphical dating because “sciences’ dating of most ancient events is just incompatible with what The [sic] Bible offers us as evidence of a far more correct timeline.” In support of this claim, he states that the scientific community must either have been duped by Satan or have been too attached to their own paradigms to see the truth. These are claims rather than cogent arguments.

A book such as this, which advances controversial theories, requires rigorous documentation and carefully reasoned arguments. Here, the author could improve his book by restructuring his arguments and ensuring that they are all precisely documented.