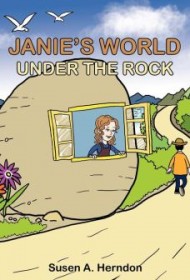 Susen A. Herndon’s picture book Janie’s World: Under the Rock portrays one fictional child’s rich imaginary world, as Janie, a young girl of unspecified age, envisions herself living under a rock.

Actually, in a rock would be more accurate: Janie’s house is a hollowed-out boulder with a window and a door. Janie narrates the book. In the first part of the book, she tells young readers about her moss floor, rock furniture, and what she eats: ”I don’t eat rock soup./I don’t eat rock stew./My favorite food is spinach./How about you?”

The text is composed in rhyming verse, which works well overall. The descriptions of Janie’s fantasy life are nice, but there isn’t much actual story for kids to sink their teeth into. Readers will be charmed by the page that reveals Janie’s rock home as a fantasy, with a realistic-looking photo image replacing the competently drawn pictures that tell most of the story.

The second half of Janie’s World: Under the Rock features two-page spreads of creatures that live under and around rocks. Children are invited to find the insects or animals (which the author lists on a separate page) in the pictures, but it’s not a Where’s Waldo? or Look and Find setup – the creatures are easy to see, and the challenge is more about identifying the correct animal and telling the difference between a woodchuck and a chipmunk, for example.

On its own, Janie’s World: Under the Rock feels a bit insubstantial, but as an introduction to a continuing character, it might yet stand the test of time. Herndon notes that the book is part of a series, and there’s a note on the last page from Janie, advising readers to watch for her next story about helping the environment.