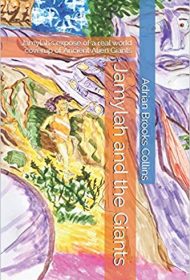 Jamylah and the Giants is an offbeat picture book about a young girl in Ohio who learns that giants were once real.

Jamylah is celebrating her eighth birthday at a backyard party when a swimming accident leaves her unconscious. Jamylah’s consciousness, separated from her own body, abruptly faces a periwinkle-skinned giant who asks her to help restore the giants’ plundered burial grounds. Jamylah agrees to help and returns to her corporeal form.

After recovering from her head injury, Jamylah begins telling everyone about the giants, and eventually starts a YouTube channel to spread her message further. As a result, Jamylah becomes a local and even national celebrity, eventually announcing that the giants will return to earth to reclaim the bones and relics the Smithsonian uncovered and secreted away.

In response, the U.S. military sends a vanguard to confront the giants. After havoc is averted by the giants’ magical powers, the president agrees to ask the Smithsonian to return everything to the old burial grounds.

In promotional material, the author notes that the story is based on reports of giant skeletons being discovered in the Northeastern U.S. in the late 1800s. Still, the book reads as fiction. Full of twists and turns—and even aliens—Jamylah and the Giants spins a modern adventure story of a girl on a mission to do the right thing.

Unfortunately, it’s difficult to pinpoint an appropriate audience for this book. The concepts, including a government cover up and the repatriation of remains, are advanced even for 10 year olds, and the dense text will be off-putting for many young readers. Yet Jamylah feels too young to appeal to most pre-teens, as does the picture book format. Additionally, the text is riddled with punctuation mistakes that make it more difficult to read.

Jamylah and the Giants is an inventive story, but it requires revision with a more targeted audience in mind.