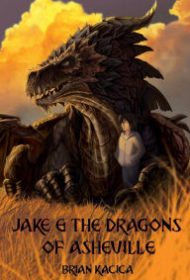 In Brian Kacica’s debut novel, a 13-year-old boy discovers he has special genetically-inherited powers—and when the government finds out, the chase is on.

Jake Winston lives with his family in the town of Asheville, and he’s heard wild stories about the town’s history, complete with flying dragons and the myth that some of Asheville’s ancestors are Destovans—humans with dragon blood. One day, Jake’s best friend Arnie, a computer genius, shows him a program he created to locate drones. When Arnie spots a military drone, the boys follow it through the nearby woods. Suddenly, another drone appears and, in a computer voice, warns them to leave the restricted area. The boys skedaddle.

Beyond the woods is a guarded facility where a covert governmental operation is underway to develop a weapon from a nearly extinct dragon species. Although the scientists possess a dragon, they don’t have the right genetic material. Then one fateful day, Jake coughs—and smoke and sparks go flying. Word travels to the agents that Jake is a Destovan, and his blood is the missing ingredient, and the plot thickens.

Kacica’s writing is wonderfully descriptive, and the characters shine with originality and humor. He has a terrific ear for dialogue— especially for the playful, sometimes off-color banter of adolescents. While a strong suspension of disbelief is necessary, once readers get used to talking dragons, ridiculously inept agents, and flying orbs, they’ll find the story delightfully quirky.

The book could use editing, as there are several scenes extraneous to the plot. For example, there’s much ado about Jake receiving a failing grade and a long description of multi-step, symbolic ritual which is undoubtedly understandable only to the writer.

Overall though, the book is a fun combination of the movie Super 8—with its smart teen cast and undertone of danger—and the Keystone Cops, with pratfalls by dull-witted characters. Readers may sense a hint of a sequel in the surprise ending.