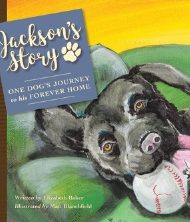 Told from Jackson’s perspective, the picture book chronicles his journey from adoption to abandonment to eventual rescue and a permanent home.  Jackson loves his original owner, a boy named Toby, (who calls him Buddy). But Toby’s father abuses the pet: “[the m]an kicked me! I yelped in surprise…It hurt my side terribly.”  The father eventually decides to get rid of the dog, tying him to a tree and shouting, “[h]ave a nice life Buddy.”

Luckily, Jackson is rescued and taken to a shelter. The workers there give him needed medical attention and neuter him (Jackson tells of being given a shot and waking up with “a sore place between my legs”) before transporting him to a new home.  At first, he expects the same violent treatment he received earlier: “I was worried the first time I knocked something over that I might be kicked, but they just…gave me hugs!” He realizes he has found a caring and safe place to live.

Because Jackson speaks in the first person, his suffering carries a poignancy that would not be as affecting if told by an omniscient narrator or adults in the story. Yet fortunately, the abuse isn’t graphic enough to traumatize young children.  Matt Blanchfield’s illustrations illuminate Jackson’s perspective at various stages of his journey, and the book ends with an effective afterword explaining how Jackson’s story is all-too-common, and discussing what children and parents can do to treat pets humanely.

Jackson’s Story contains some punctuation and grammar errors. More importantly, the text is extremely dense for a children’s picture book, taking up whole pages. This is likely to feel overwhelming for younger readers. Still, the story is engaging, and readers will want to see Jackson’s happily-ever-after ending.

The lengthy text will certainly deter some young readers. Nonetheless, Baker has crafted a touching story with an important lesson.