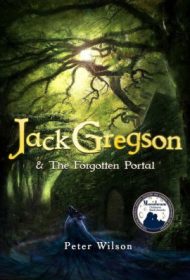 Australian writer Peter Wilson has created a fantasy world that older children and young teens, like its hero Jack, will want to explore.

The Gregson family are enjoying their annual gathering at beautiful Gregson Manor. But Jack, 13, and his cousins David, also 13, and Rosie, 11, have been banished from the picnic after they used dynamite to try to open a mysterious door—the subject of many fantastical family tales—that has been locked for ages in the Western Garden. On their own indoors, the three find a strange book about the manor, which appears ancient, yet seems to “know” what’s currently happening.

When Jack’s grandmother learns the children have found the book, she realizes it’s time to tell Jack more about his background. He already knows that his mother died when he was born and his father left shortly afterwards. Now he learns that his whole clan is in grave danger from an eerie black cloud called Theorden, but worse, from Theorden’s ruler: their hateful ancestor, Richard Gregson. As inheritor of the manor, Jack’s urgent task is to recover a missing blue gemstone—the key to the portal—so it doesn’t fall into Richard’s evil grasp.

Peter Wilson’s supernatural saga is sure to please his target audience from the start. The author, who designs digital games, music and movies, has artfully created a smart, bold boy hero who must battle not only the dark mist and its brutal leader, but inner burdens: the loss of a loving mother and the specter of an enigmatic father who may have joined forces with the enemy. David, the rather bumbling sidekick and Rosie, the clever, no-nonsense female, make excellent companions for the intrepid Jack.

There’s enough action here to thoroughly engage young readers and make for an enjoyable read-aloud. The totality has a cinematic feel, and readers will eagerly anticipate sequels two and three, which Wilson notes are headed to publication.