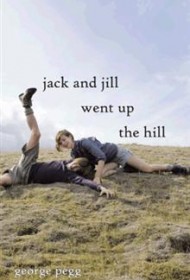 Jack and Jill Went Up the Hill is an unsparing novel centered on the lives of heroin addicts and alcoholics in England. On the back cover, author George Pegg calls it a novel “based around true facts,” and it’s hard to put down despite the need for thorough editing.

Jo is a drunk, waking in the morning with vodka and cider, the only priorities he can focus on. He doesn’t just drink to blackout; he wets and soils himself routinely. Elle’s life revolves around scoring a “rap of brown,” injecting heroin and then drifting, only to return to Earth and once again need to score. The two steal money and anything they can resell or trade for another fix. Their friends make rehab and redemption seem impossible: if everyone you know is a junkie, how do you kick the habit?

By story’s end, the characters have faced stiff consequences for the fun they’ve had. One has had a medical crisis that may point to a way out of the life.

Although there’s much to admire, the novel suffers from many flaws. There are disconcerting inconsistencies ( “Emma” on the back cover is “Elle” inside the book, for instance). The writing is convoluted, with incorrect word usage, grammar and spelling. (Consider: “The government has legalism for gays now”; or “Stale cigarettes lay bare, empty from a window of a ground floor flat that appeared to be disserted [sic] with its old, ripped curtains covering the view.”) This makes the characters’ already rich slang even harder to understand.

That said, the energy behind the writing is infectious. Pegg balances the exhilaration of scoring and using with the desolation of the morning after. His novel recalls Trainspotting for its ability to humanize people living in opposition to the norm without glorifying their choices.

This book features a powder keg of a plot, but it needs significant reworking to realize the potential on display here.