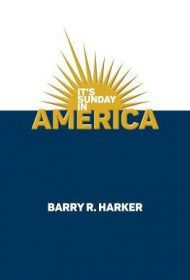 In It’s Sunday in America, Barry R. Harker lays out what he sees as a possible danger to religious liberty in the United States.

Here, he posits that social and cultural tensions between conservatives and progressives—especially in the areas of abortion and same-sex marriage—could ultimately lead to an uneasy partnership between the Catholic Church and Protestant denominations. In turn, the author contends, this could lead to unhealthy political alliances and the enactment of something called Sunday legislation, a nationwide blue law that would make Sunday a mandatory day of worship and rest for all people.

Examining detrimental religious authoritarianism of early New World settlements like Jamestown as well as the founding fathers’ beliefs about the separation of church and state, Harker notes that America has withstood numerous attempts in its colorful history to replace democracy with theocracy. The most recent attempt, he believes, involves President Trump and his debt to evangelicals who helped him get elected.

Trump’s possible appeasement to certain Christian values and ideals, coupled with Pope Francis’s recent writing on the environment (which seem to argue for an overthrow of governments), are creating a perfect storm that will erode religious liberty. For Harker, all of this is connected to biblical prophecies that suggest, “that America will abandon its commitment to religious liberty.”

Through his use of current events, theology, and speculation, Harker engages readers with well-organized chapters that are thought-provoking and adeptly argued. Most religious scholars see the idea of Sunday legislation as an elaborate conspiracy theory that grew out of Seventh-day Adventist’s beliefs. Nonetheless, the author provides enough research and evidence to make skeptics take pause.

Many will disagree with Harker’s theories and conclusions, but sensational theories aside, he paints a telling picture of America today, one that is “dreadfully divided at a time of increasing international tensions and geo-political tectonic power shifts.” Indeed,  few can argue against his observations of a country culturally at war with itself and God.