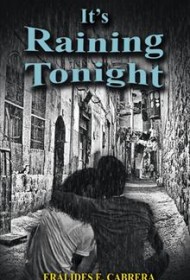 But life darkens after John’s father loses his job and takes his own life, and John’s mother, Joan, is forced to take a job. Her income isn’t enough to support them, however, and John also goes to work. As Joan’s parents opposed her marriage outside the Jewish culture, so Joan — even as she attempts to persuade herself she is not a racist — rejects Vanessa: “ … then this morning’s image of Vanessa sitting at the table came back to haunt her. She saw the curly hairdo, resembling an afro. How shameful, she thought. … The thought of a black girl dating her son … was unbearable to her.”

Likewise, Vanessa’s father opposes the relationship. But when her parents learn she is giving up a scholarship — as is John — so she can stay behind with him while he continues helping out at home, the story threatens to turn tragic.

Although it would be difficult for anyone to tackle this oft-reinvented tale in a truly fresh way, Cabrera creates likable characters and authentic scenes. Undermining his efforts, however, are minor issues, such as redundant descriptions and an error in the date of the Columbine High School shootings, and more significant flaws, notably the inexplicable speed at which the two fall in all-encompassing love and a final heavy-handed drama. To Cabrera’s credit, there is no fairy—tale ending, but it does come with a fitting sweetness. All in all, readers will recognize this universal tale and may enjoy it simply for its contemporary and hopeful approach.