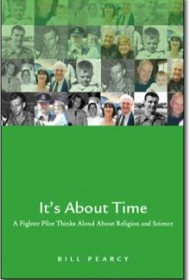 It’s About Time: A Fighter Pilot Thinks Aloud About Religion and Science is sold short by its subtitle. While the book does represent author Bill Pearcy’s attempt to reconcile Christian theology with a more modern understanding of the universe, his ideas are more carefully refined than readers might assume from someone simply “thinking aloud.” The slim volume represents a relatively sophisticated counterpoint to the idea that religious faith is antagonistic to scientific thinking.

Among the challenges Pearcy tackles are: squaring divine creation with the Big Bang; the compatibility of God’s omnipotence with human free will; and reconciling eternal life with our understanding of the laws of the universe. Central throughout is the suggestion that God is subject to time, but apart from it.

Pearcy manages each topic with careful thought and clear articulation. His approach to free will, for example, shares fruitful similarities with philosophers such as Immanuel Kant, drawing important distinctions between the world as we experience it and the universe as it is in itself, as God must experience it. Not every discussion is as successful; his examination of God’s omnipotence is less adequate, ignoring critics who would claim that being all-powerful contains inherent contradictions.

Pearcy has not written a comparative theology, but devoted nearly all of his attention to core Christian beliefs. It’s About Time is not likely to convert many to a theology they don’t already share with the author, nor does it try to. Instead, it provides insight into how one person can square belief in a modern scientific worldview with faith in the central tenets of Christianity. Readers who find themselves on the same path will find useful ideas among Pearcy’s musings.