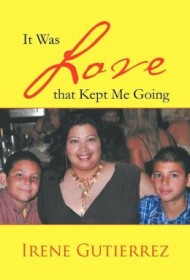 After her divorce, author Irene Gutierrez saw more trouble than most people have in a lifetime, a string of unfortunate events recounted in her inspiring memoir, It Was Love That Kept Me Going.

The daughter of a migrant worker and a former American soldier, Gutierrez was no stranger to hardship. But when her marriage ended when her sons were 3 and 5, she lost her home and her job and was living in her car — which broke down. She couldn’t afford to feed her children. Just as things started to turn around, she began experiencing extreme pain, which was eventually diagnosed as rheumatoid arthritis. A chronic inflammatory disease, RA, as it’s also known, can be debilitating and unpredictable.

Yet no matter what life threw at Gutierrez, she maintained a positive attitude that shines through this book. The title pretty much explains it all: here is a humble, kind-hearted woman who, despite the demands of single motherhood, a full-time job as a cashier and a debilitating medical condition, persists in seeing the glass as half-full. She instills that legacy in her young sons, who provide love and support in return. The book, written in a chatty rather than artful manner, is full of stories, anecdotes and advice, with copious dashes of lively dialogue and detailed descriptions.

Readers should be aware that the text contains many glaring copyediting errors – especially the misuse of the possessive apostrophe “s.” Also, it looks as if the book may have been at least partially transcribed from a recorded interview, such as when parenthetical comments such as “(Laughs)” appear in the text.

Still this is a worthy effort, if only for a refresher course on facing life’s challenges with love, courage and dignity.