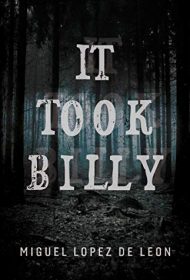 The book begins with the second half of 15-year-old Billy Ranter’s journal. The pages were found, with the first part torn out, near the cabin from which he was abducted by the demonic being Chaos. The journal, which becomes an internet sensation, details how Chaos has used drugged food and sensory deprivation to enlist Billy into a cult that worships five goddesses who represent the four seasons and the coming of the next ice age. Chaos plans to use the cult to further the suffering and destruction on which he thrives.

The book’s second part is the journal of Michael, a young man with Doctor Strange-like powers who infiltrates the cult to try to prevent a catastrophic ice age. A third journal from Chaos himself confirms the contents of the first two accounts and portends what the future might hold, while introducing the possibility of a sequel.

As young people are drawn to the cult through the internet, de Leon skillfully demonstrates the power of social media to affect attitudes and convey a semblance of power to “loners” and “losers.” The daily journal entries illustrate how beliefs of hostages can be incrementally molded, creating the Stockholm Syndrome. Meanwhile, the author’s descriptions of the disgusting rituals recruits undergo shift the novel from fantasy to horror and keep the pages turning.

Unfortunately, readers are left with many unanswered questions, including: What was in the first half of Billy’s diary? Where did Michael and his friends come from? What was Billy’s father’s reaction to the loss of his son? Is Chaos alone, or are there others like him?

It Took Billy is suitable for young adults, in addition to its stated target audience; it’s easy-to-read narration is as addictive as the drugged bread Billy eats. But more context would allow it to better satisfy the reader’s cravings.