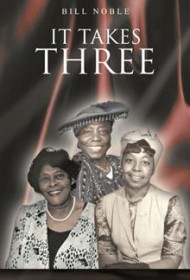 Bill Noble notes that his memoir is written as a tool for youth experiencing family and social dysfunction. By describing his own life, Noble seeks to provide both a sympathetic story and an example of success through hard work, faith, and strong mentors.

Noble introduces It Takes Three with a discussion of his work with troubled youth and how his own story can serve as inspiration for them. Noble’s mother divorced her husband and took Noble away with her when he was young. Before long, however, Noble’s father regained custody. Noble was welcomed by one stepmother and, after she and his father had a falling out, built a new relationship with yet another stepmother. The women in his life, he explains, became a buffer against the demands of his short-tempered father. Noble finally describes his experience with college, his path after graduation, and his decision to forgive his father for the negativity he suffered as a boy.

Throughout the memoir, Noble, an African American, skillfully weaves in descriptions of small-town Southern life and his experience with segregation. He possesses an engaging voice and a deft ear for storytelling. While his life is interesting, however, the narrative often slows with unnecessary particulars, such as the number of As and Bs he received in a particular semester. He also poses his childhood as a very dysfunctional one—more so because of the number of mother figures he had to navigate. This ignores the fact that many children never have mother figures in their lives at all, and that it is not the number of mothers but the quality of care that would most fundamentally affect one’s experience.

Noble has led an interesting life, and he talks about it eloquently. He overstates his case, however, which prevents his story from being as sensitive and relatable as he had hoped.