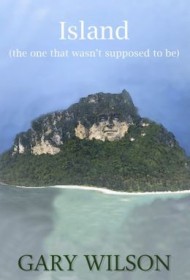 In this story, a man commits a crime, but instead of turning himself in, he runs. Using only his wit and a friend’s $2,000 loan, he survives for ten months before returning to face the consequences. Gary Wilson’s Island is an engaging novel about this man’s life on the lam.

The narrator – whose real name is lost amidst ever changing identities – never reveals the crime he committed. He kayaks, camps out, travels by bus, evades bounty hunters and border checks, finds a temporary home in Acapulco and, after his money runs out, arrives penniless in Los Angeles. Is he escaping a full-scale manhunt? He never knows, but he prepares for the worst. “There is nothing like a nationwide arrest warrant hanging over your head to add a little spice to life, to keep you on your toes and teach you the existential responsibility of genuine discretion,” Wilson writes.

The plot closely follows Wilson’s life. According to his bio, he also evaded the law before returning to serve a sentence for homicide and can write with authority that a baseball cap and shades can be the best disguise, “social levelers that turn every one of us into just another goober.”

Wilson embellishes his already compelling plotline by slicing it into pieces, rearranging their order and interspersing the pieces between philosophical musings about the meaning of life. This unnecessarily complicates the story, often making the chronology confusing. Wilson also maintains a running conversation with an imaginary “Reader,” which frequently derails the flow of his storytelling. After a vivid account of sleeping in a tree in the Canadian Rockies, for example, the narrator breaks in: “I think I’ll leave you stranded on Castle Mountain surrounded by ravenous grizzlies for a while, Reader.”

Those nuisances are a shame, as a more straightforward telling would have been effective. Even so, the experience recounted here of living life on the edge delivers many vicarious satisfactions.