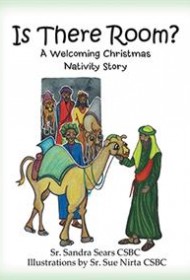 A picture book retelling of the nativity story, Is There Room? presents the story of Jesus’ birth in verse, painting the picture of all those who attended his first night in Bethlehem.

The narrative begins with Mary and Joseph seeking shelter at an inn. Backstory and context are not provided, so young readers will need to be familiar with Joseph and Mary in order to contextualize the story and understand its significance. They settle into the stables and are soon graced with a series of visitors: shepherds, kings, chickens, mice, spiders and so on.

At first, the story seems as if it will build numerically. First two shepherds appear, then three kings. But that conceit soon dissolves as the number of subsequent visitors becomes more random, with “a couple of chickens” showing up next, followed by six mice, three spiders, etc. An italic refrain listing the growing number of guests appears on the page to the right of each new visitor’s introduction.

The verse is engaging and rhythmic, with conversational appeal: “Said Joseph, ‘Kind sir, is there room in the inn?/ We’ve travelled so far, and my wife is done in.’” But some of the rhymes are marginal (i.e.“Ralph” rhymed with “himself”) and at times, the story can feel scattered. Characters are often introduced in the illustrations, but not discussed in the verse. Because the increasing tally follows the visual rather than written cues, this can be jarring. The author’s Australian heritage might also pose problems for American readers: The chickens are referred to as “chooks,” for example, and Joseph and Mary can’t find a room anywhere because the inns are “all chocker block.”

Nonetheless, this is a warm retelling of the classic story, and readers will appreciate the community that builds in these pages. They will also find some truly endearing verses, such as the final one when a child arrives, offering a simple but lovely gift for baby Jesus — “only my heart.”