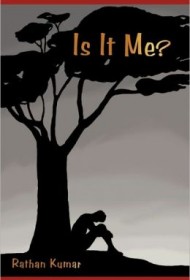 This novella springs from an intriguing premise. George Waldorf, a young African-American computer specialist from Philadelphia, is troubled by a recurrent dream. He’s galloping a black stallion in a Southern forest; alongside, a blonde, blue-eyed wraith, apparently the love of his life, rides a white horse. Passion and foreboding fill the air.

What do we have here? An inter-racial fantasy? Ancestral memories? Psychotic delusion? Enter the plot-thickener: Dr. Surash Gupta, a Harvard-trained psychologist who dabbles in hypnosis and reincarnation theory. All in all, good raw material for paranormal melodrama.

Unfortunately, author Rathan Kumar proves stronger on concept than execution. Is It Me? is brief, but the plodding story lacks dramatic density, and Kumar’s writing is as colorless as it is overly casual (“the restaurant was pretty much full with all kinds of people”). Meanwhile, poor George, a protagonist we yearn to embrace and identify with, sounds like a lukewarm mix of cliché and convention. Are we to believe that “his heart shattered into a million pieces” or that when his dream woman materializes in a singles bar, “thousands of volts of lightning entered his head and exited through his toes”?

Give Kumar credit for ambition. Before he’s done, George’s quest for the truth behind his visions leads him to rural Georgia, back to the ante-bellum 1840s and inward to a part of himself and his family’s past that he never knew existed.

In addition to more nuanced characterization, the book needs enlivened dialogue and more thorough research. (Stripped of their identities, slaves had no African surnames in the 1840s, as they do here; the 170-year-old family photos on which a crucial point of Kumar’s plot turns could never have existed because chemical photography was in its infancy and certainly had not penetrated the slave cabins of Georgia, among other examples.)

Still, the story has promise: in the hands of a competent screenwriter and director, this could make an exciting movie.