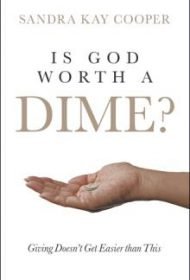 Sandra Kay Cooper’s Is God Worth a Dime? addresses the biblical practice of tithing (giving 10% of your income) to God’s kingdom work, more specifically to the local church. Cooper feels that many Christians either don’t fully understand the benefits of tithing or simply reject God’s command to give.

In her short handbook, Cooper includes her personal testimony of discovering that giving (specifically 10%) was the path to both financial solvency and learning to trust God to meet her needs. During a Bible study fellowship course, she was inspired by the story in the Book of Mark where the poor woman gave all she had, while the rich gave only out of their excess. Jesus had been watching, concerned not with the amount given, but with the spirit of their giving.

Cooper also offers a short history of our U.S coin, the dime, and a plan for becoming a tither even if in debt. She backs up her suggestions with Scripture verses and a few repeated quips, such as “you can’t beat God at giving.”

At book’s end, Cooper includes a worksheet and cursory instructions for creating a simple financial budget.

The book is written conversationally and might provide the inspiration some need to begin tithing. The author’s voice is encouraging and enthusiastic. That said, Christians who study the Bible will already be familiar with the concepts presented here, which are discussed on an elementary, rather deeper and more sophisticated level.

As a result, the aforementioned aren’t likely to find value in this offering. It may appeal, however, to Christians without prior exposure to the idea of tithing.