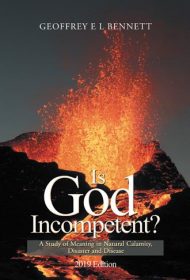 Geoffrey E.L. Bennett has seen suffering. As a hospital chaplain’s assistant, he dealt daily with the sick and dying. He suffers from diabetes and cancer and saw his wife die after paralysis from brain tumors. His father sustained severe burns in a medical accident.

These experiences led Bennett to interrogate the Christian God: Is God indifferent to human suffering or incompetent to prevent it? What does human suffering mean in a world where, according to Christian teaching, God is in control?

After a cursory exploration of non-Christian philosophical and religious beliefs, Bennett offers a lengthy exegesis of the Book of Job, the Scripture touching most directly on suffering. He next turns to the Prophets, who foretold misfortunes of the ancient Israelites and Judeans but also the coming of a Messiah. This portion of Bennett’s book presents standard Christian apologetics and a rational reading of ancient Scripture.

In the book’s second half, Bennett turns to science, exploring the causes of diseases and natural disasters such as forest fires to show how they work for humanity’s good: For example, forest fires are necessary for the ecosystem of heavily forested areas, despite the loss of life and property.

Bennett posits God created a world of free will where humans can respond with love to God and one another or do the opposite. God is not indifferent or incompetent; he limited his power by creating a world where conscious agents can choose and natural forces are at play.

Bennett’s synthesis of religion and science is refreshing in a world that often sees them in conflict. He brings his extensive education to bear on personal, philosophical problems. The drawback is that his approach is explicitly Christian, unlikely to convince anyone who has rejected that faith’s principles.

Christians who reject fundamentalism and embrace science will find in this book a fine example of 21st century Christian apologetics giving modern solutions to ancient dilemmas.