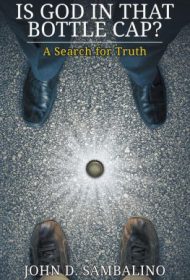 John D. Sambalino’s Is God in that Bottle Cap? presents his lifelong quest to discover “What’s it really all about—reality, the universe, spirituality, God?” Part memoir, part spiritual guide, it’s a page-turning journey focusing on what Sambalino calls the “Ultimate Reality” or “Ultimate Truth,” even as the author remains very much of this world, attending school, marrying, raising a family, and becoming a successful lawyer and entrepreneur.

The first half is autobiographical, beginning with Sambalino’s childhood, where he recalls his innate sense that life went beyond what was evident. This feeling propelled him as a young man to practice meditation, martial arts, and customs from ancient traditions, especially Hinduism, Buddhism, and mystical Christianity. From this unfolds a remarkable inner and outer journey, including spiritually electric moments when Sambalino experiences the transcendent; overcoming a lethal rattlesnake bite using meditation abilities to stabilize himself; and exploratory treks to India, Nepal, Bhutan, and Egypt.

The second half offers advice on meditation and its benefits, along with musings on the nature of the Ultimate Reality that underlies all things.

Sambalino writes conversationally, adeptly drawing on parables and stories from traditions he has studied and devising his own analogies to express abstract ideas, such as likening the Ultimate Reality to a movie screen: “The screen…just sits there on the wall, not adding or subtracting from the images projected upon it, and you are unaware of it while the movie is playing.” Nevertheless, it exists.

Generally, Sambalino’s narrative strikes an effective balance between his high-achieving personality—he has meditated two to three hours daily for over 40 years, among other endeavors—and his sincere desire to humbly share his experiences. A few times, however, he appears to brag about an achievement, which is momentarily off-putting.

Overall, though, Sambalino is a gifted storyteller who compellingly shares his spiritual journey to inspire others. The title itself invites readers to consider that everything, however small, contains the answer to life’s biggest question.

Highly recommended for fans of Ram Dass (Be Here Now) and Paramahansa Yogananda (Autobiography of a Yogi).