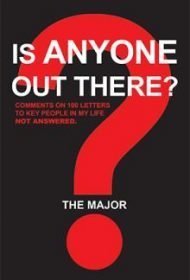 Is Anyone Out There? presents an amusing conceit: Reproduce 100 letters you’ve written to various people in authority—none of which elicited a response.

The author, an entrepreneur and adventurer who served in the British military (hence, the pseudonym The Major), seems to have spent much of his life as an inquisitive gadfly. And he has documentation to prove it. “Since the advent of word processors and their continuing threat to letter writing, I have always remained determined to put pen to paper… thus recording for posterity most of the major milestones in my life.”

He has sent his missives to a wide range of individuals, from the Windsor Town Council (requesting action concerning “hooligans” who attacked him on the Thames) to Ted Turner (who provided an introduction for one of his books). Also: the Archbishop of Canterbury; the curator of the Dachau concentration camp memorial; Theresa May; the Nairobi police chief, and others. Each letter is followed by a short explanation of why he wrote it and photos that, together, enhance the picture of the author’s life.

The writing is tinged with humor. At one point, for example, The Major and his son waited to present a project to not-very-receptive church officials: “Neither of us had sat on such a hard wooden bench in such austere circumstances since waiting to be beaten at school, and it made both of us look at each other as though that was, again, just about to happen.”

The author has a remarkable ability to connect with movers and shakers, who provide tours, sumptuous dinners or world-class lodging. How he met so many A-listers is never explored, which can be frustrating; he will suddenly be on a plane with an Indian prince, with minimal explanation of how they know each other. The text also contains copyediting errors, including a plethora of typos.

Ultimately, though, the letters and stories behind them are quite entertaining, and the book proves worthy of the reader’s time.