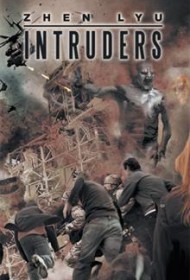 Blending elements of science fiction and speculative fiction, Zhen Lyu’s novel about a group of five students stumbling across a subterranean civilization of giants will remind some readers of classic Japanese kaiju (strange beast) movies from the ’50s and ’60s, especially The War of the Gargantuas (1966).

Tonally, Intruders is very much like a monster movie, powered by brisk pacing, relentless action and numerous plot twists, while elements such as character development and setting are all but ignored. The main characters—five recent university graduates—are essentially two-dimensional. Once they discover the giants while exploring caves, their focus turns to how they can process the flood of revelatory information they receive while among the creatures. Some types of beasts are peaceful, while others consider humans as food.

When the young explorers return to their homes after escaping their subterranean confines, they soon realize that some of the giants have found a way to the surface as well, and their mission becomes to avert an all-out war. With a ruthless human military leader bent on destroying what he perceives to be a nest of monsters, the young heroes must find a way to save the misunderstood creatures and all the historical intelligence they possess.

While the storyline certainly is interesting—especially a bombshell plot twist based on something the group discovers deep in the giants’ realm—there are major pitfalls to Intruders. The text has more than a few grammatical errors and the narrative has a lost-in-translation feel to it, almost as if it was written in another language and converted to English. Sentences such as “All went silent ghastly” and “… I must make soldiers in this floor to go away” exemplify what science-fiction fans can expect with this reading experience.

While this is likely to deter many readers, those who can get past such prose will find a fast and fun read full of adventure and thought-provoking speculation.