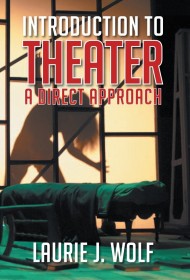 The brevity of this book belies its competent and handily comprehensive overview of the ages-old, collaborative and ephemeral art of theater.

Intended for students who are not majoring in drama, the book ably explains and provides context for the development of theatrical traditions, including the characteristics and eternal qualities of such things as theater spaces, dramatic literature, the roles of the playwright, director, actor, various designers (scene, costume, lighting and sound), dramaturge, and audience. Equally valuable is a concise, chapter-by-chapter junket through the important high points of theater history and literature, from the ancient Greeks and Romans through the Renaissance to the “modern” era of realism and anti-realism in France, Russia, and Germany, 20th century American plays and today’s “theatre of diversity” – contemporary ethnic playwrights and productions.

Wolf’s book makes it possible to understand where theater comes from and how and why it affects all those who participate in it—including the audience. Theater, she notes, mirrors and influences its society’s view of the world, and not only structures our understanding of it, but gives us a means by which to process it.

Despite a few lapses in chronology and a necessary superficiality to better suit the material to its readership, this is a fine introduction to the discipline of theater and an enthusiastic invitation to embrace Coleridge’s “willing suspension of disbelief” and join in the universal experience created onstage and among the spectators. A glossary could be helpful, and the chapters are obviously based on the professor author’s lectures, but her love of theater is infectious.

This book is also recommended for theater-goers who would appreciate more background on the plays they attend than a short paragraph in Playbill, especially in view of an established trend toward revivals of the classics in a variety of venues.