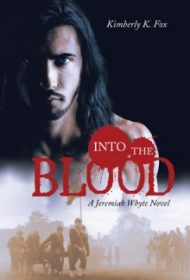 In Into the Blood, science fiction meets historical fiction meets romance when Jeremiah Whyte travels back to the time of the American Civil War.

Jeremiah, who lives in a future time, has spent his life training in survival and combat, and acquiring knowledge of nearly every period in history. With his training, he will be sent back in time to complete specific missions. His instructions are somewhat vague, just that he will be told when the mission is completed and may communicate with his superiors through a chip in his brain.

Jeremiah wakes up in Gettysburg, PA, during one of the bloodiest battles of the Civil War. He is Union officer Trevor Tompkins, and it is his mission to make sure a woman named Miriam Klark survives the war. He discovers that she is a nurse with the Union Army. Trevor braves bloody battles and performs duties as a doctor, saving many lives along the way. But, it is Miriam’s life, in particular, that he must protect, along with his secret identity.

In telling Trevor and Miriam’s story, the author portrays the horrors of war, while maintaining a focus on the characters. Fox injects historical knowledge into the plot, without ever overwhelming the journey. The characters are engaging and readers will quickly connect with their story and motives.

However, it’s difficult to remain invested, as the plot slows in the middle due to the repetitive nature of the writing and characters’ interactions.  For example, Miriam and Trevor have practically the same conversation repeatedly as Miriam seeks more information about Trevor’s past and Trevor avoids the questions. Trevor’s interactions with his supervisors in the future are minimal, and could have added depth and interest to the story.

In spite of this stumble, Into the Blood offers readers rewards. Its strength lies in the characters and the mystery surrounding the true nature of Jeremiah/Trevor’s mission, which is finally revealed in a clever surprise ending.