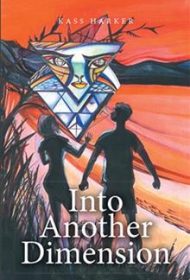 Author Kass Harker sends two young kids on a journey into an alternate world in his middle grade novel, Into Another Dimension.

When young Edward receives a “Futuristicator” for his birthday, he’s thrilled to show it off to his school friends. In addition to speaking to and understanding humans, it can fly, swim, and otherwise multitask.

Then, while he and his sister Gemma are test-flying the magical toy, they wander into a forest and soon find themselves in Picturedurmia, an alternate world that’s aware of and able to cater to humans; much of what the siblings experience is designed to resemble their lives back home — only better. While Edward and Gemma await the chance to return home safely, Picturedurmia comes under attack, and the children and their new toy must help save the day.

Harker packs much excitement into this story. The thrill of the unknown forces Gemma and Edward to rely on one another, bringing them closer, and the common fantasy of kids who feel overlooked to return home as conquering heroes is well-rendered here. There’s humor that generally hits the mark as the Futuristicator and citizens of Picturedurmia try to adapt to English colloquial speech.

Still, while young readers may be drawn into the excitement of a toy that can communicate and help people out of various scrapes, the story includes distracting inconsistencies. For example, when Edward unwraps the Futuristicator, it’s in a branded toy package (he recognizes it by the writing on the box). Later, though, it’s described as something developed via a mission to Mars and not a toy at all. Additionally, alternating chapters describe the family’s search for their lost kids, but the plotline eventually trails off.

In order for the world created here to feel real, the story needs editing for internal consistency. Nonetheless, Into Another Dimension is fanciful and imaginative and captures some of the fun (and fear) of being a child suddenly saddled with very adult responsibilities.