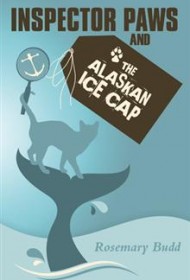 Rosemary Budd delivers another madcap cat-and-louse caper as feline sleuth Inspector Paws sneaks aboard an Alaskan cruise hoping to help his caretaker Stella assess the situation between the shady Leroy Garvey and Stella’s friend, Jo, and, if necessary, prevent the two from marrying.

Paws is discovered and threatened with being thrown in the brig or overboard early in the story. Meanwhile, the stowaway cat rapidly realizes that Garvey is truly no good. Loyal to the memory of Stella’s deceased husband, Ernie, Paws also wants to keep the ship’s captain’s own paws off Stella. Meanwhile, Stella’s headstrong granddaughter Max presses the reluctant captain for information to explain the uncanny resemblance between her and the captain’s son Alvin.

When murders occur, Paws proves better at sniffing out villains and villainy than the humans, and the cat’s efforts to make the humans see danger and opportunities for solving the crimes spark suspense.

Told from the point of view of a cat who is always eluding threats himself, the action is not just fast-paced but constant, and Budd effectively, if often breathlessly, moves it along by means of single-syllable verbs as in: “…a crew member rushed toward me. I leaped off the chair, dashed through the doorway and raced down the stairs.”

The cat’s inner thoughts are equally animated. Often exclamatory, they employ expressions only a cat might use, ranging from the cutesy (“Cat-o-nine-tails!) to the mildly and amusingly disgusting (“Great furry hairballs!”).The cat’s-eye view of human foibles often centers on clothing and allows for some humorous lines, as when Paws observes, “A balding man with a voice even louder than his shirt waved his camera over his head and bellowed for his wife.”

Overall, the fast pace and cat’s perspective make Inspector Paws and the Alaskan Ice Cap a lively romp. The novel delivers a quick read that will appeal to adults and older teens who simply can’t get enough cat mysteries.