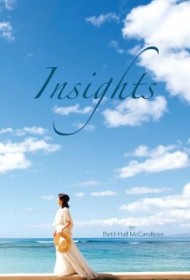 The poems in Insights aim broadly to model inspirational self-reflection for the reader. As the speaker announces in “Voice of Experience,” “I have some words of wisdom here/ To guide and see you through.”

The book, however, is largely comprised of platitudes rather than the kind of deep wisdom readers might hope for. For example, the poem titled “Patience” (one of two that share the same title), reads: “PATIENCE/is not just understanding and/“being there for someone.//True patience is NOT/understanding—//and being there anyway.” Similarly, “Voice of Experience” warns readers: “Be careful what you tell yourself—/You’re liable to believe;/ And tangled webs, when we are fooled,/ Are easiest to weave.”

Many poems rely on archaic diction, such as “anon purblind,” “surcease,” “doth,” “thence,” and “selfsame,” which is distracting to contemporary readers. Similarly distracting are the many varied fonts and type sizes, some of which strain the eyes to read.

Perhaps most promising are the 13 mico-essays interspersed throughout the collection. In their current form, they read as journal entries, more therapy-writing than crafted, literary prose. However, the speaker begins to reveal herself here in a more personal, thoughtful, imagistic and specific way. For instance, “Toilet Paper Legacy” begins, “My grandmother used to tell us, when we visited my grandparents in their cottage on Lake Ontario, that the septic system was limited, so we were only allowed to use THREE sheets of toilet paper at a time.” This passage offers a vivid memory, the promise of an unfolding narrative. Similarly, in “Hope vs. Trust,” the speaker begins, “You spoke to me of a young girl who suffered as I do—she had fibromyalgia.” While these passages require development and rely too heavily on exposition, the prose shows promise.

With deeper thought and attention to detail, the author’s work would be more likely to engage general readers. In its current form, however, this book will mostly appeal to the writer’s friends and family.