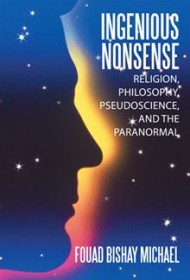 Ingenious Nonsense: Religion, Philosophy, Pseudoscience, and the Paranormal aims to champion “hard science” (sciences based on chemistry, biology, and physics) against opposing worldviews in understanding the universe. In the author’s words, “Our survival and well-being will ultimately not come from mythology or speculative nonsense but from science.” The book begins with a focus on the biology of the brain and how it affects thought and language, and contrasts this approach to understanding the world and behavior with sections critiquing religion, philosophy, and pseudoscience. It closes emphatically with a chapter titled “The Triumph of Science.”

The book falls into a growing genre of skeptical atheist works (the author mentions books by Richard Dawkins and Christopher Hitchens) that tend to discredit religion, pseudoscience, and the paranormal. It is competently composed, but unfocused. Chapters include comprehensive information on the author’s chosen topics, but the information doesn’t always connect to his thesis.

Additionally, the author includes so-called “soft sciences” (particularly psychology) under the umbrella of pseudoscience, while only offering a small sample of scholarship in those disciplines (e.g. he criticizes psychoanalytic approaches but ignores cognitive behavioral therapy). Similarly, he postulates that the questions of philosophy have already been answered by scientific inquiry, but relies almost exclusively on antique and rationalist philosophers to support this claim (the only 20th century thinker mentioned here is Wittgenstein).

In skimming the surface of philosophical thought, the author’s analysis sidesteps tantalizing issues such as the existence of free will (the science doesn’t support it), and how we can know reality. As such, he has little to say about larger questions of meaning and human behavior and, unfortunately, the conclusions he draws may strike the reader as premature or unsubstantiated.