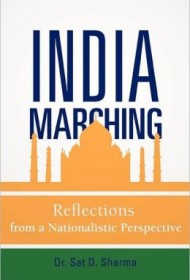 India Marching is a passionately argued work of revisionist history. The author, an internist who has published widely in medical journals, wants to write the “real history” of the struggle for India’s freedom from the British Raj.

Dr. Sat D. Sharma argues that a group of committed revolutionaries—(a great deal of space is given to a discussion of the contributions of Subhas Chandra Bose)—were more responsible for Indian independence than either Mohandas Gandhi, who he ranks as “treacherous” and “sycophantic,” or Jawaharlal Nehru, who is treated as nothing more than Gandhi’s pawn in Congress. Following Independence, Sharma blames both Gandhi and Nehru for “one of the greatest tragedies in human history,” as they settled for a dominion status and a partition with Pakistan, rather than complete independence. To Sharma, then, the history of modern India is one of betrayal and compromise. Taken to its logical end, Sharma ends his critique by castigating the present Indian government for its “all around rampant corruption.”

This is not a work of professional history; rather it is amateur history, and it carries with it all the strengths and weaknesses of that genre. As with most history buffs, Sharma’s command of the narrative can be compelling, often encyclopedic. He is also uncompromising and passionate in his prose. However, as with most non-professionals, passion leads to technical problems: There is much repetition and issues with grammar and syntax. There is also much missing from this work that might allow for readers to better judge Sharma’s claims. He offers few quoted specifics in his work; there is no bibliography, no footnotes, and no index.

India Marching offers such a passionate point of view that it will likely find an audience of those interested in the subject. However, Sharma’s important position deserves a greater scholarly precision and depth of analysis than is delivered here.