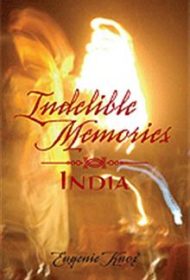 The author’s impressions from her sojourns reflect the universal experience of travelers immersing themselves in other cultures. Westerners who have been to India will relate to the familiar scenes Knox depicts, such as in Calcutta where “the air rang with the cries of food vendor’s [sic] carrying enormous baskets of fruit on their heads.”

Knox also offers information from her trainings as a yoga teacher and explores memories she found especially profound from time with her gurus, including experiencing the aftermath of Baba Muktananda’s death, when “every square inch [of the ashram] was taken up with people” chanting loudly. Despite the beauty of the moment, his death created divisions in the ashram,  and Knox and her daughters subsequently left, never to return.

Knox initially wrote these recollections for personal reflection, not publication (the text is in a diary-like font that mimics handwriting), and therefore the narrative oscillates between lack of context and too much minutia. Overall, it has a disjointed feeling, exacerbated by its structure: The first and final sections center around her experiences with Indian gurus, while the middle section takes place mainly in Australia and focuses on the studio and familial entanglements. The family elements in particular seem out of place, including details of her daughter’s marriage difficulties and drama with friends who stayed with the author for a while.

Sentence fragments and missed punctuation are common throughout the text. The book includes hand-drawn sketches and photographs; the latter aren’t always sharply reproduced.

The difficulties mentioned mean Knox may fail to fully engage general readers. Still, this is a heartfelt memoir, and those with an interest in spiritual topics or who have taken similar journeys themselves may connect with Knox’s story.