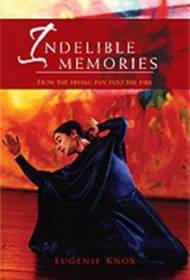 Indelible Memories: From the Frying Pan Into the Fire is a compelling memoir by an Australian woman reflecting on her years of young motherhood with (and escaping from) an abusive alcoholic husband and struggling to raise two beautiful young girls with scant economic resources.  Part of a three-volume series, this book spans 1964, when 23-year-old Knox was raising her young daughters, to 1980, when she was 59 and about to embark on a trip to India with her children.

As a new mother, Knox lives with husband Jim and their daughters in a rural area. Drunk night after night, Jim often terrorizes his family with behavior that is “dangerous and frightening and ugly in the extreme” — until Knox becomes friends with an older, much more independent woman, who helps her eventually escape.

From there, Knox gains confidence, reconnecting with herself and her past training as a dancer. She trains in the Martha Graham Technique in New York, and returning to Melbourne, begins performing, choreographing and teaching. As the story unfolds, we follow Knox through rising and falling fortunes, many house moves, some unfortunate romantic attachments, and everything in between. Knox has several almost-clairvoyant moments of intuition and eventually joins an ashram, following the guru Swami Muktananda Paramahamsa. She describes how she received his gift of grace, “Exactly as if He had thrown a spear at a deer grazing in the forest, and striking it perfectly into the heart.”

This memoir is consistently entertaining, authentic, and sympathetic. Although not everyone will relate to the Eastern metaphysics, Knox’s writing is always grounded in details and readers never feel she’s out of touch with reality. Her world expands as she continues to come into her own as a woman who trusts her own ambitions and deep spirituality.

Readers from all walks of life will enjoy this memoir, with its vivid descriptions of Australian life in the 1970s and one open-hearted woman’s intimate journey into emotional and artistic maturity.