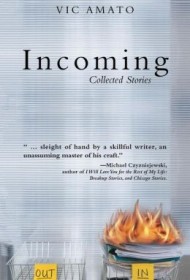 This short story collection is generally centered on male characters during significant or memorable moments in their lives. The stories vary in tone, but are often lighthearted or nostalgic, with a few darker tales thrown in the mix.

In “Betraying Norman,” a colleague’s confidential confession leads the protagonist to recall a time in grade school when he betrayed a classmate and came to regret it. In “Dad List,” a father finds a book he’d written (“A Father’s Little Book of Advice for his Son’s Freshman Year”) during a period when he feared his son was failing in life and would not make much of himself. The memory leads him to examine his own weak start at college. Among the most fully rendered of the offerings is “Scarlet Amber,” in which a man whose marriage has lost its spark is reminded of the college sweetheart he let get away.

These pieces are largely enjoyable, rendered in clear, descriptive prose. In “Camille,” for example, author Vic Amato amusingly describes a photography instructor as “… a squirrelly, balding, string-tied, cowboy-booted know-it-all with a big, curly ended mustache.”  His best stories are those involving the narrators’ recollections, which usually come with a hint of regret. Likewise, he shines at the light snapshots of life, such as the short-short “Who Ripped Off My Lunch?”

There are a few pieces that would benefit from more development. In “The Man Who Didn’t Care,” it’s unclear if the story is meant to be ironic, as sometimes the protagonist’s actions belie the title— or do they? “Big One-Hearted Tennis” recounts a tennis match, but readers aren’t given enough information about the characters to understand what is truly at risk, and the ending falls flat.

Overall, the author delivers original tales, told by narrators who are generally likable and familiar and facing situations most readers will identify with. The collection is worth a look for short story fans with a taste for literary fiction.