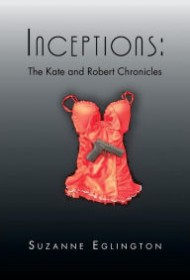 The story opens with Kate dumping long-time boyfriend Scott after she’s learned of his infidelity. She very quickly takes up with Robert, an acquaintance who, it turns out, has been obsessed with her for the last six years. He’s possessive but also a powerhouse lover, so who wouldn’t want to be possessed by him? They’re quickly engaged and divide their time before the wedding between bouts of athletic sex and getting Kate moved into Robert’s opulent home.

At its most fiery, this is a hot read; Kate and Robert can’t spend ten minutes apart without making up for it in sweaty sex described in graphic detail. Fans of straight, relatively vanilla erotica will likely eat it up.

The book has several flaws, however, that can be distracting. Eglington uses what seem like misheard idioms at times; someone has an “outer-body experience,” and a character says at one point, “I’m sure that threw him off the loop.” In addition, Kate’s first-person narration sometimes includes italicized thoughts for emphasis that often ring false or inappropriate for the situation. At a dance club, for example, she’s thrilled to be out with Robert and full of nervous energy. The italic thought is: “Blah!”

At one point, there is a violent scene that should be shocking, but the two protagonists are laughing and back in bed before the dust settles. And finally, the title is baffling; readers are never clued in to what sort of “inceptions” the author is referencing.