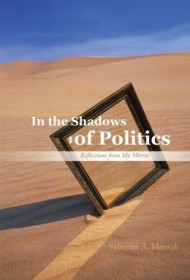 It’s not often that a person as young as 50 writes his life story. But Sylvester A. Mensah has much to tell. A former member of Ghana’s parliament and National Democratic Congress party functionary – and for the last 10 years the head of his country’s national health insurance program – Mensah has led a full life.

The author’s story is intertwined with that of his father, Lovelace Mensah, a Ghanaian diplomat and an inspiration to his son. His slim book devotes a number of its 153 pages to the elder Mensah’s accomplishments before Mensah the younger dives into his own life and political career.

The author’s life has been one of ups and downs – from working as an MP to being unemployed; from getting an MBA in finance in the UK to inexplicably (to him, at least) losing a party election. A constant has been his wife (“I count her another one of the numerous blessings God has sent my way”) and family.

While his life journey has its merits for readers, the narrative too often becomes entangled in the intricacies of party politics, and Mensah’s stories can be overly involved. For those who follow Ghana’s political landscape closely, this might not be a problem. But others may find it too “inside baseball.” For such readers, his mentions of events or things unfamiliar to most readers – such as the Rawlings Coup or a “class 3 stream school” – can greatly bog down his story.

Serious students of African nationalism will find In the Shadows of Politics a useful addition to their education. Other readers, however, may glean less than they hoped for from Mensah’s memoir.