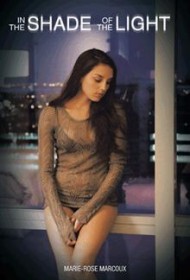 In the Shade of the Light promises an engaging read about a woman tortured by the suicide of her young daughter. Unfortunately, it ultimately falls well short of the mark.

Author Marie-Rose Marcoux is Canadian, and readers of her novel might well conclude that perhaps English isn’t her first language, as instead of offering a compelling story of love, loss and regret, In the Shade of the Light traps readers in a maddening maze of puzzling word choices, improbable sentences and confusing transitions.

In the first chapter, for example, Marcoux writes: “Although Fannie was solitary by nature, the idleness left by the abandonment of her family sapped her spirit since the only career that she never was passionate about was to pamper that one.” Later, she writes about Fannie reevaluating her life: “Cost to cost, she would authorize her feelings to come out.” And as the novel closes, she notes: “Fannie knew her eldest daughter who would eventually make the grade between assertion and attack.” Such sentences will cause readers consternation as they struggle to determine the author’s meaning.

There are a few bright spots. Characters such as the tortured daughter Lisa and her husband Real take shape briefly, but then fade away. And despite the strangled language, Marcoux manages to convey the angst of a mother who ultimately failed her daughter.

This is a short novel, but its brevity doesn’t make it any easier to read. It’s unfortunate that readers will concentrate on guessing which word Marcoux meant to use in each ever-confusing sentence instead of following her tragic story line.