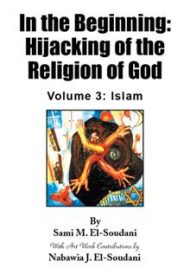 In this third volume of In the Beginning: Hijacking of the Religion of God, author Sami M. El-Soudani turns his attention to Islam. Unlike the previous two volumes that argued that there has been a usurpation of true Judaism and true Christianity by those willing to subjugate God’s law for human law, the author argues here that “So long as there exists one pristine copy of the text of the Qur’an anywhere in the world, Islam can never be hijacked, at least in a doctrinal sense.” In other words, no one has tampered with Islamic sacred scripture the way they have with Jewish and Christian writings (no original versions of the Torah or the Gospels exist today).

Still, El-Soudani contends that attempts have been made to commandeer Islam by those who have challenged seven tenets of Islam, what the author calls the “Seven Operating Principles.” One example of attempted hijackers of Islam were the rulers of the Ottoman Empire, whose imperialistic drives caused them to put earthly goals before heavenly dictums. Others include religious fundamentalists around the world who refuse to see that government, based on writings in the Qur’an, should be “of the people, by the people, for the people.”

Yet, the author holds his strongest criticism for countries like the United States and former President George W. Bush (the book’s copyright is 2009) for the West’s great push into the Middle East, unsettling families and sacred tradition, and for the use of insulting rhetoric toward Muslims (e.g., the use of the term “radical Islam”).

Of the three volumes, this may be the most pointed politically—focusing less on theology and more on nonbelievers’ attacks on Islam. The text here, like in the other two volumes, is filled with long, sometimes dense paragraphs that can make for challenging reading. Unlike the previous two books, this has a breathless, urgent feel to it—as if the first two were a preamble for discussing how Islam is misunderstood by the world at large. As in the others, there are numerous misplaced commas and intermittent grammatical mistakes.

Overall, El-Soudani’s three-volume work, and this one in particular, is an ambitious project. Jews, Christians, and many religion scholars are likely to object to the ideas found within these pages (especially the author’s thoughts on Zionism and his scrutiny of St. Paul). Yet, Muslim readers will find much to discuss here.