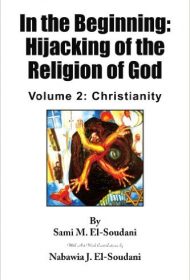 Many theologians have argued that what we think of as Christianity is really something called Paulism. That is, not a religion based on the teachings of Jesus Christ but one based on the teachings of St. Paul. An early persecutor of Christians in the first century C.E., St. Paul experienced a famous conversion on the road to Damascus, which led him to become possibly the biggest evangelizer of what would become Christianity. But is what Paul preached really what Jesus preached?

The spirit of this question resides in the second volume of In The Beginning: Hijacking of the Religion of God. Here, author Sami M. El-Soudani focuses on how Jesus, seen by Muslims as a great prophet, is commandeered by St. Paul. At the heart of the author’s argument is an assertion that Jesus never believed he was the Son of God, that this idea was created by St. Paul to help mythologize the holy man who preached kindness and forgiveness in the Galilee (Paul was blinded, the author contends, by a sort of messianic fever that was part of his Judaism at the time).

Christianity was further appropriated by the Emperor Constantine, whose Council of Nicea in the fourth century hammered home the idea that Jesus was divine (up until that time many believed that Jesus was solely human). Christianity then became a puppet of government. All of these errors, the author asserts, led to the creation of the “Christ Myth” that infects billions or people around the world.

The shortest of El-Soudani’s three books in a series, this volume is the most focused. And while there are a number of misplaced commas, awkward sentences, and long dense paragraph, the author seems most at ease on these pages. Although many of his ideas aren’t new—readers of progressive theologians like Bart Ehrman will be familiar with many of the arguments against Christ’s divinity and the inaccuracy of the Gospels—his provocative opinions are compelling for their mixture of aggressiveness and restraint. El-Soudani seems to feel great sympathy for Jesus and those he believes have been misguided by what he thinks are false teachings.

Ultimately, readers of comparative religion and those interested in the historical formation of Christianity will have much to debate here.