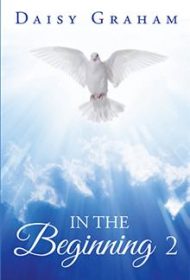 In this sequel to In The Beginning, cataclysmic events in the year 2020 have occurred on earth, and individuals have disappeared. Those remaining are left to ponder the whys. Working together to rebuild their lives, ultimately they look to God for answers.

In Daisy Graham’s prophetic, visionary tale, characters Jeff Thompson and Joe Blake journey across a New Zealand landscape to assess the damage from recent meteor strikes, fires, earthquakes, and tsunamis that have ravaged the island’s terrain. Jeff’s thoughts, including dreamlike recollections of family members being “taken up” into a bright light, often turn to Bible passages that predicted recent occurrences and the eventuality of a new heaven and earth. Meanwhile, the men encounter fellow survivors, including a natural healer and master gardener and a computer-savvy young woman that Jeff develops an attraction to. All will join forces to rebuild their surroundings.

As with many sequels, readers must play catch-up with events from an earlier installment, and it’s difficult to know how much time has passed since the world began to collapse. Graham’s opening chapter introduces characters without including any background or connective information. A wrong name that seems inadvertently substituted for that of a central character adds to this confusion.

Still, there is much to like here. As a native Kiwi, Graham uses vivid detail to capture the environment, however altered by catastrophic events. The story is driven by its characters, and dialogue flows smoothly as they purposefully ask questions of one another to make sense of what has happened. Interestingly, Graham pointedly uses one character’s poetic talents as inspirational entertainment for the group.

By book’s end, Jeff, Joe, and fellow “chosen ones” find resolution to their struggles in a new landscape. Perhaps the author might consider a third installment to follow these characters into this new, uncharted realm. For those appreciating compact, creative fiction highlighted by heavenly intervention, Graham’s work is a thought-provoking read.