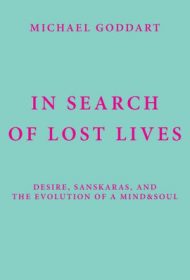 In this life, 68-year-old Michael Goddart has endured child abuse, unrequited love, and decades of debilitating illness that left him with plenty of time to hone spiritual beliefs. Luckily, he has the writing skills to turn that quest into an intriguing memoir that’s part journal, part morality tale.

In Search of Lost Lives is a whirlwind tour of 88 past lives Goddart has accessed, including times when he was reborn as cows or rabbits to atone for sins committed during previous human incarnations. The author explains that he unlocks past life memories by meditating on things that trigger feelings of déjà vu, like movie scenes or evocative songs. Each chapter in the book summarizes the details he has recovered about a particular life and the lessons learned from it.

All told, the author writes, he has accessed 4,137 past human lives spread across 173,821 years. Some took place on other planets before he arrived on Earth in the year 173,211 BCE.

Modern authors have written about reincarnation since The Search for Bridey Murphy took the world by storm in 1956, but Goddart may be the first to compile such a thorough personal timeline. He writes with engrossing detail about his time as a Cambridge biologist (1430-1483) who married but racked up bad karma points by experimenting on animals, for example, or as an attractive Swedish teacher (639-680) who experienced his soul’s first true longing to connect with God.

At 400 pages, the book is too long. The rich storylines of recent lives thin as Goddart works backward to the distant past, creating an information overload that could have been prevented by deleting as many as 20 less pivotal chapters. And there are too many unnecessary asides that prove distracting.

Still, readers who stick with him until the end will find a satisfying summation of the values that really matter and the reward that awaits those willing to endure the effort it required to develop them.