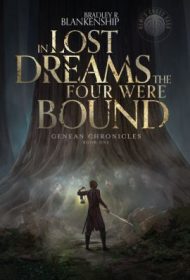 Bradley R. Blankenship’s In Lost Dreams the Four Were Bound is a high fantasy novel with the feel of a folktale, punctuated with a science fiction twist.

In the remote village of the Hyunisti people, several outsiders from a fallen race dwell: Neris, descendant of a storied and regal heritage; her brother Nerin, who courts apparently dark magic to return their legacy to greatness; and Elis, Neris’s lover and the mother of an innocent young village girl who factors into Nerin’s plans.

Days before the community’s rite of spring, while Nerin plots to leverage a nefarious force to regain power, Elis and Neris rescue Davnian, a mysterious outsider eerily reminiscent of the legendary Virage, a dreaded figure associated with the cataclysmic downfall of Neris’s and Nerin’s people. Davnian ultimately becomes a lover to both Neris and Elis, but his mysterious memories and fractured voices foreshadow a collision of the four characters’ destinies that threatens to change their world.

Oddly, the novel opens not on the Hyunisti world, but with a window to an interstellar human drama in a futuristic setting complete with space stations and androids. The wider connection to that prologue, which feels gimmicky rather than organic, isn’t fully revealed until novel’s conclusion.

Blankenship’s writing shines in action sequences, but those are rare initially, and readers must trudge through confusing in medias res passages and vague mythology to decipher the ensuing plot. Overblown prose abounds: “To free the village, they must break their past. They must break the matron shackled by knowledge and history. They silence the great chaos in their midst. And without a link to the obvious, the many within her needed bait.” The story culminates in a perplexing, unsatisfying conclusion.

This is the work of a promising writer, with a thoughtfully developed culture at its center, but the author’s ornate prose makes the story difficult to follow. The result is a confusing narrative that prevents the novel from fulfilling its potential.