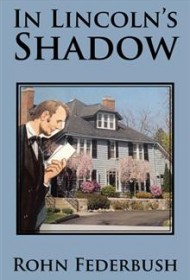 Spanning nearly 20 years, this Christian crime novel is the story of two families joined by murder and marriage.

The story revolves around Bernie Johnston, a 30 year-old female social worker who wants to change careers to become an investigator. (One assumes the author means a private investigator, although this issue is left vague.) Steffen, the brother of Bernie’s best friend, is a homicide detective, and the two meet and fall in love.

Steffen mentors Bernie by taking her to the scene of a murder: A wealthy old woman has been killed in her large house while her only child, a son, lives just across town in a shabby double wide with his wife and six children — and one of those children, readers learn at the story’s beginning, is a ruthless killer. As Steffen and Bernie try to unravel who killed the old woman, the child figures into the larger plot. (The title derives from Steffen’s habit of quoting Abraham Lincoln, a device he cultivated to cope with the suicide of his wife.)

Rohn Federbush handles the Christian aspect well. Her characters are sincere practitioners of the faith, rather than preachy caricatures. She also has a solid grasp of the mechanics of writing, including punctuation, spelling, and sentence structure (although the second half of the book is dotted with typos).

What’s lacking here, however, is depth and authenticity. The story is set in Ann Arbor, Michigan, but there’s no sense of place: no descriptions of the city, no mention of major landmarks and so on. Furthermore, the author fails to provide detailed back stories for her characters. As a result, they are woefully one-dimensional.

Federbush seems to be aiming for the sort of densely plotted novel Tami Hoag does so well, but she hasn’t yet mastered Hoag’s skill for making people and places come alive. As a result, this book is strictly for readers with modest expectations.