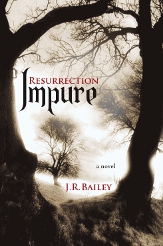 Powered by an intriguingly complex antihero, richly described realm-building, relentless pacing, and a darkly lyrical and deeply philosophical narrative, the first installment of J.R. Bailey’s fantasy series is gloriously comparable to classic adventure fantasy sagas like Moorcock’s History of the Runestaff, Howard’s Conan, and Leiber’s Fafhrd and the Gray Mouser.

After almost being turned into a vampire, young necromancer Koristad Altessor was chained and imprisoned in a coffin for 16 long years. Now freed and working as a proxy lightwielder — a warrior dedicated to keeping the peace and upholding the laws of the empire — Koristad sets out to avenge the death of his family at the hands of a ruthless usurper known only as the Vampire King. But in the time that Koristad has been confined, the world has changed radically. It’s more lawless than ever, with dark magic users and an assortment of nightmarish monstrosities lurking on the edges of civilization. Accompanied by an initiate lightwielder named Peril — a naÃ¯ve young girl who is Koristad’s exact opposite — the unlikely duo do battle with a myriad of foes, including giant barbarians, rogue necromancers, druids, were-beasts, etc. All the while, Koristad inches closer to his ultimate goal of vengeance.

Although the exceptional characterization, nonstop action and dark atmospherics are certainly remarkable, it’s Bailey’s contemplative interludes throughout the narrative, very much like R.A. Salvatore’s Drizzt Do’Urden saga, that make this such a memorable reading experience. Here’s an example: “I’ve often questioned the difference between revenge and justice. I think it comes down to this: revenge is decided and carried out by the person who’s been wronged, while justice is merely revenge carried out by people who weren’t involved. Is that what we call being civilized? Of all the things in this life, it seems vengeance should be the most personal.”

This is nothing short of an extraordinary adventure fantasy — simply unputdownable.