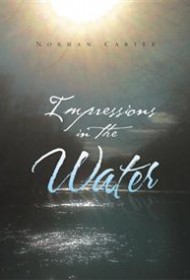 Impressions in the Water by Norman Carter is a short book of poems delivering glowing praise for God.

The first 12 poems follow the story of Genesis, the Fall, Cain and Abel, etc. and end with a poem about the death of Christ. After these offerings, Carter includes a poem in the voice of God and then five more poems, also religious, in the voice of a human narrator.

Photographs of landscapes, waterscapes, and flowers serve as the background of every poem. The pages are rather dark, and so even though the words are superimposed over a digitally lightened area, the black text can be hard to read. That said, the images have a consistent style and their imagery nicely aligns with the poems’ themes and moods.

Carter uses natural imagery to evoke God’s grandeur, as in the first poem, “Impressions in the Water,” which concerns God’s pleasure in his magnificent elemental creations: “There are stratus and altocumulus and cirrostratus and more/ There are cumulus funnels that would reach heaven’s floor…”. While the scientific classification of clouds is anachronistic in this context, Carter’s naming of these natural phenomena in this and other poems helps his book stand out from other religious collections.

Some poems carry predictable messages about the need to listen to wisdom, to know that “Your spirit man is the real you” and to rely on God’s constancy. Overall, Carter’s work describes feelings of trust and gratitude, rather than personal emotion or situations. In that sense, they won’t satisfy readers hoping to learn about the author as an idiosyncratic individual.

Carter’s book is full of enthusiasm and some attention to language, but is not especially distinctive or complex. Those looking for artistic sophistication and originality may want to look elsewhere, while readers who share his faith may find the poems here engaging and uplifting.