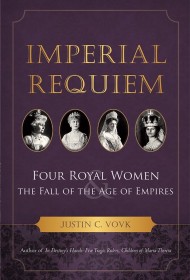 In this large volume, Justin C. Vovk explores the end of the imperial age, when empires and kingdoms disintegrated in the wake of World War I, through the intersecting lives of four women: Augusta Victoria, married to German Emperor and King of Prussia, Wilhelm II; Mary, wife of British King and Emperor of India, George V; Alexandra, Tsarina of Russia; and Zita, wife of Austrian Emperor and King of Hungary, Charles I.

Vovk’s primary aim, he notes, is not historical but rather to tell the stories of “four extraordinary women.” At the same time, though, Imperial Requiem provides an historical framework for their biographies, beginning in 1858 and ending in 1989. Zita is less well known than her Western European counterparts, but just as crucial for an understanding of how the royal bloodlines of the 19th century became irrelevant in post World War I.

Vovk adds nothing new to the period’s history, but that is hardly a criticism of a group biography that admirably seeks to tell the stories of these royal lives—aided by family trees, illustrations, photographs, a map, extensive endnotes, and a bibliography. Vovk relies on both primary and secondary sources and is well aware that he is dealing with events and personalities subject to differing interpretations and disputes.

The author is conscientious but also pedestrian as far as his style is concerned. For example, he writes lumbering phrases such as “my mind could not help but be drawn to” while defending his inclusion of Zita.

Given the intricacy of events and the plethora of sources available to him, Vovk does an admirable job of writing a coherent narrative. He provides an informative and reliable, if not riveting, guide to that last great group of ruling personalities — people who were unaware of how close their empires were to extinction as their privileged worlds were on the verge of collision and collapse.