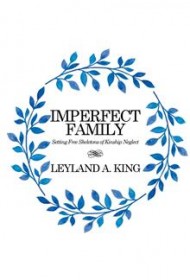 Leyland A. King grew up in British Guiana, one of seven children born to a laborer and a hairstylist who raised them with a blend of harsh discipline, parental neglect and deprivation. He tells his story—and theirs—in Imperfect Family, a blend of memoir, academic text, and cautionary tale, with a sprinkling of folklore, scripture, and humor thrown in.

The result of these many approaches is an uneven, disorganized, and sometimes jarring read, as the text bounces between anecdotal material and social science tropes. “All I ask is that elitist spun pejoratives about ‘savage man’ and ‘man in state of nature’ (propagated especially by revered ‘thinkers’ in a specific geographical area of the globe) be given a rest and buried by cousin-swapping aristocrats and their ilk.” An excessively elaborate writing style (as demonstrated in the latter sentence) poses a further challenge, one apt to send readers to their dictionaries to learn that “consanguinity” means related by blood, “penurious” means stingy, and “mendicant” means beggar.

Even so, Imperfect Family is not without merit. King skillfully depicts the shifting loyalties within large families and engagingly recounts his and his siblings’ youthful shenanigans, as when an older brother, a non-swimmer, takes him to the community pool for a lesson he barely survives: “I tumbled and rotated like fabric in a laundry machine.”

Imperfect Family also depicts the sad legacy of familial violence. King writes with poignancy and compassion about the father who beat him just as he had been beaten by his own father. King and his siblings nonetheless honor their duty to both parents, caring for them when they are no longer capable of caring for themselves.

Through education, hard work, and determination, King sees to it that the legacy of violence stops with him. He becomes a child protective investigator in the U.S. While his text offers many reading challenges, his narrative may appeal to those interested in family sagas set in exotic locales.