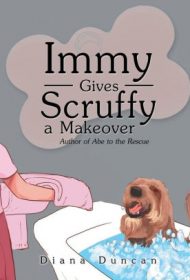 In Immy Gives Scruffy a Makeover, a child learns to look beyond the superficial and value the internal beauty of other creatures.

Written in verse, Diana Duncan’s picture book tells the story of Immy, whose parents worry that she gives too much weight to external appearance. They decide to get her a dog so “[s]he’ll forget about lipstick and combs.”

At the animal shelter, Immy surprises her father by choosing a mongrel named Scruffy. She declares that “[h]e is ugly and ragged and really quite old,/ but he’s the one that I love…” She “sees the beauty within him./ He’s devoted, and he’s her best mate.”

Duncan’s rhyme scheme is delightful. The sing-song rhythm will increase its accessibility to young readers, while also exposing them to the potential of poetry as a means of expression. Parents should enjoy reading this work aloud to children who cannot yet read on their own.

The accompanying illustrations are engaging. Scruffy’s “long ears and a face like a bear” shine through in the pictures.

Duncan never explains why “[t]he SPCA is the best place to go” to find a dog, which decreases the educational impact of the work. Also, it is not clear why Immy is determined to make Scruffy “all gorgeous and fluffy” on the outside, if she values him for his internal character. Similarly, at the shelter, Immy curiously rejects other dogs based on characteristics such as fur color and facial features, while choosing Scruffy in spite of those qualities.

It would be helpful if the author could clarify some of the internal conflicts regarding Immy’s moral growth. Nonetheless, Duncan’s book would be an entertaining read for a child both for its language as well as the valuable lessons it aims to impart.